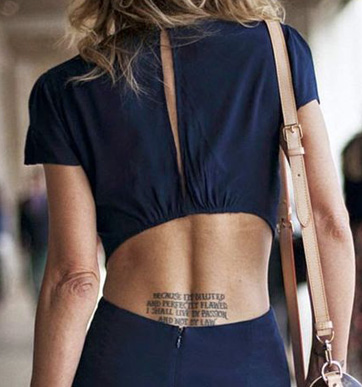 You found the cutest off-shoulder top to wear with cut-offs for brunch. What’s not so cute? The green shamrock and italicized “lucky” spanning your right shoulder. Yes, we’ve all done things in youth that we regret today, but for unwanted tattoos, there is now a better solution for their removal: the PiQo4 picosecond laser.

Using lasers for ridding tattoos isn’t new. But to date, tattoo removal has remained largely inefficient. Tattoos with challenging colors could only be partially removed, leaving an even less desired faded smear, and up to 20 treatments was necessary for semi-satisfactory results.

The good news is that advancing technology has produced a new generation of tattoo removal lasers that more completely and quickly remove ink. Enters the PiQo4 picosecond laser for tattoo removal. How does this laser work? Let’s first understand exactly what a skin tattoo is.

What is a tattoo?

A tattoo represents a collection of pigment particles placed into the skin by very fine needles. Once deposited, our bodies recognize the particles as “foreign” objects, and our immune system mounts a defensive response. Much like it would react to a splinter penetrating the skin, the immune system attempts to wall off these pigment particle “invaders.” Resident skin cells called macrophages engulf the particles, isolating them from surrounding cells. Overtime, as macrophages die and are replaced, small particle bits are removed internally, and the tattoo image looses its clarity.

How does the PiQo4 laser work for removing?

The PiQo4 laser targets colored pigment particles. When the laser is fired, very fast picosecond bursts of energy are transferred to the pigment particles, immediately shattering them. This initially breaks bigger rock-like ink particles into pebbles, and subsequent treatments break these pebbles into sand and then sand into dust. Because the dust particles are so small, our bodies process these particles for internal elimination and the tattoo disappears.

What makes the PiQo4 laser better than competing lasers?

Let’s be real. While tattoos on Angelina Jolie look understated-chic, most of us don’t have an on-call stylist to maximize their appeal. If you have an unwanted tattoo, schedule an appointment with one of our board-certified dermatologists to better understand your PiQo4 tattoo removal options.